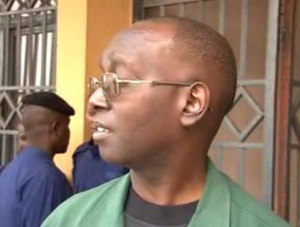 Following his July 2010 arrest, Jean-Claude Kavumbagu was charged with treason, which carries a life sentence in Burundi. Kavumbagu’s trial was held on April 13, 2011. On May 13, 2011, the verdict found Kavumbagu not guilty of treason. However, according to reports, he was found guilty under Article 50 of the Law of the Press of publishing an article “likely to discredit the state or the economy” and was handed an eight-month sentence. On May 17, 2011, Kavumbagu was released, since he had already spent 10 months in pretrial detention.

Jean-Claude Kavumbagu is the editor of the French language online newspaper Net Press.

Kavumbagu was arrested on July 17, 2010, and charged with treason. The charge came after, in his newspaper’s opinion page on July 12, he questioned whether Burundian security forces were capable of preventing a terrorist attack similar to those which had taken place in the Ugandan capital Kampala a few days earlier. Kavumbagu was charged under Article 507 of the Burundian penal code, which penalizes attempts “to demoralize the army in times of war.” Prosecutors failed to explain how the charge was applicable, since Burundi was not at war.

Kavumbagu had been arrested on five previous occasions by five consecutive governments but had never been convicted. In 2008 he was charged with defamation in connection with an article accusing President Nkurunziza of misuse of public funds during the 2008 Olympics in China. He was acquitted in March 2009 after spending seven months in detention.

A panel of three judges was reportedly supposed to rule on the legality of Kavumbagu’s detention at the beginning of August 2010, but the hearing was not held, reportedly because the head of the panel had been promoted, meaning that a new judge had to be named. Kavumbagu’s lawyer said that this was a tactic designed to prolong the trial. At a hearing on September 1, the prosecution reportedly failed to prove that Kavumbagu did not respond to summonses. On September 6, Kavumbagu’s bail request was rejected, and at the appeal hearing on November 9, his defense claimed that violating the press law and defamation do not justify preventative detention and that treason is not a valid charge. However, the Appeal Court of Bujumbura confirmed his pre-trial detention on November 11.

Kavumbagu was held for a total of ten months at Mpimba Central Prison, which reportedly was built for 800 inmates but is now housing 3,500 common criminals. He was denied access to newspapers, and he has stated that he believes that his treatment was punishment for his criticism over the last decade of the former Hutu rebels who now make up the government.

At the time, he was the only known online journalist imprisoned in sub-Saharan Africa.

Will Burundi be the next target of the Somali al-Shabaab?