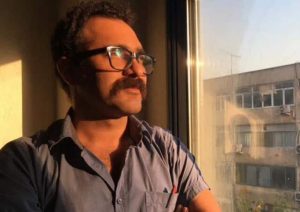 Arash Ganji is a prominent writer, translator, and the Secretary of the Iranian Writers’ Association (IWA), which advocates for freedom of expression and an end to censorship. On December 22, 2019, Ganji was arrested and detained at Evin Prison for 29 days. The cause for his arrest was initially unclear, though later revealed to be his translation of a book about a Kurdish-led uprising in northern Syria. On December 28, 2020, he was sentenced to 11 years in prison on national security charges. His sentence was upheld on appeal, though in accordance with Iranian law, he will only serve the longest of his sentences, which is five years.

January 24, 2022: PEN America submits a complaint with the UN Working Group on Arbitrary Detention seeking a ruling finding the unjust detention of IWA leaders Baktash Abtin, Reza Khandan Mahabadi, Keyvan Bajan, and Arash Ganji to be in violation of Iranian domestic and international law and asking for their immediate release and compensation.

January 1, 2021: PEN America condemns the unjust sentence levied against Arash Ganji and other members of the Iranian Writers’ Association, denouncing the Iranian state’s pattern of abuse and disregard for the rule of law.

January 3, 2020: PEN America releases a statement in the wake of Ganji’s arrest. In the statement, PEN calls on the Iranian government to immediately release Ganji and provide him with all necessary medical treatment in the meantime.

Since the 1979 Revolution, dissenting opinions and freedom of expression have been severely restricted in Iran. The Iranian Writers’ Association (IWA) is the 1993 revival of a 10,000-member-strong group of the same name founded in 1968 and banned shortly after the Iranian Revolution in 1981. Its former leadership was arrested and hundreds of its members were killed during mass executions in 1986. A group of thirty writers helped revive the organization in the early-to-mid 1990s as censorship grew under Akbar Hashemi Rafsanjani’s presidency. The Iranian government has taken a harsh stance against the IWA since its revival, using persecution, harassment, and even targeted murders to silence its dissident voice.

Ganji was arrested by Ministry of Intelligence agents on December 22, 2019, after they raided his apartment and confiscated his belongings, including his laptop, books, and notes. According to the IWA, Arash Ganji was arrested for his 2017 Farsi translation of the book A Small Key Can Open A Big Door: The Rojava Revolution, a collection of articles by different authors about Kurds in the Syrian civil war. The book centered on U.S. and coalition-backed Syrian Kurdish militias who successfully defended the Syrian town of Kobani from an offensive launched by ISIS fighters in 2014. Ganji’s other translation credits include Sunset of the Gods on the New World Order and The Struggle Over the Way of Thinking in the Working Class Movement.

After his arrest, he was detained at Evin Prison in solitary confinement, where he was subjected to interrogation and denied visitation from either his family or legal representation. After nearly a month in detention, Ganji was released on January 19, 2020 on a bail of 450 million tomans. However, at his first court hearing in June 2020, a judge increased his bail to 3 billion tomans, forcing him to return to Evin Prison for six days until he was able to pay. On December 28, 2020, Branch 28 of the Revolutionary Court of Iran sentenced Ganji to 11 years in prison—five years for “conspiracy to act against national security,” five years for “membership and cooperation with an anti-regime group,” and one year for “propaganda against the regime.” His sentence was later upheld by the appeals court in Tehran on February 27, 2021. On October 16, 2021, Iranian authorities formally summoned Ganji to serve his 11-year sentence. As is common practice in Iran, the court ruled that he must serve the maximum sentence of the three charges, amounting to five years in prison. On October 28, 2021, Ganji reported to Evin prison to begin his sentence.

Ganji suffers from a heart condition that requires medical care, which his family fears will continue to be denied as COVID-19 ravages Iranian prisons. In a statement published by the IWA, the organization announced: “Arash Ganji has a heart condition and the pressure brought on by interrogations (known the world over for violations of human and legal rights) has threatened his life. The body that has arrested him and the government that has shown that it only knows how to beat up, imprison and kill to counter the freedom of expression will be responsible for any hurt that comes to him.”

The Iranian government has launched similar attacks against other members of the IWA, which Ganji denounced in a statement to PEN Sydney in June 2021 as “attack[s on freedom of expression] from reactionary states, the servants of imperialism.” IWA board members Baktash Abtin, Reza Khandan Mahahabi, and Keyvan Bajan were transferred to Evin Prison on September 26, 2020 to begin serving a collective 15-and-a-half years on spurious national security and propaganda charges. On February 11, 2021, IWA member Alireza Nouri was taken to the central prison of Hamadan to begin a two-year sentence on the charge of “publishing obscene poetry in cyberspace.” Additionally, IWA member Amin Moradi was arrested on November 29, 2020 by Ministry of Intelligence agents after they searched and confiscated his personal belongings.

Iran is among the world’s most restrictive countries for freedom of expression. While the human rights situation in Iran has been dire for decades, the state of freedom of expression and respect for fundamental rights in the country has deteriorated even further in recent years. Iran holds the fourth-highest number of writers and intellectuals in prison globally, according to PEN America’s 2020 Freedom to Write Index. Dozens of journalists are currently imprisoned on politically-motivated charges in Iran alongside scores of other writers, bloggers, artists, human rights defenders, and other political prisoners. Despite promises of expanded freedoms, Hassan Rouhani’s presidency was marked by intensified repression and arbitrary political restrictions—preventing Iranians from having a voice in how they are governed. And in August, Ebrahim Raisi became the country’s new president, after a June election in which all opposition candidates had been disqualified. Raisi is notorious for his past role in human rights abuses, having been accused of involvement in mass killings of political prisoners in the 1980s. Iran remains notorious for a judicial system completely lacking in transparency, which is guilty of numerous arbitrary arrests and one of the world’s highest rates of capital punishment. Hundreds of political prisoners are languishing behind bars during the COVID-19 pandemic as authorities withhold critical care and medical attention, putting their lives in great danger and sometimes leading to death. The Iranian government has also been engaged in the targeting and transnational kidnapping of dissidents, writers, and journalists outside the country, and the harassment of family members inside the country.

For months, a handful of books dealing with #LGBTQ themes have been targeted by #KansasCity area conservatives. But facing a new Missouri law, some schools have removed a wider array of books, including #SlaughterhouseFive, #Watchmen and #TheHandmaidsTale. https://www.kansascity.com/news/local/education/article266556371.html#storylink=cpy

Thrilled to see this important recognition of the deeply courageous work of activists from Ukraine, Belarus, and Russia, including @pen_belarus member Ales Bialiatski. #NobelPeacePrize2022 https://twitter.com/nobelprize/status/1578309539870318603