Address to the participants of 83rd PEN International Congress in Lviv 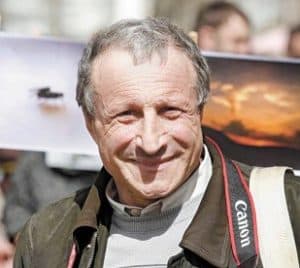 Crimean journalist and RFE/RL contributor Mykola Semena addressed the 83rd PEN International Congress in Lviv, Ukraine on September 18.  Semena is awaiting a verdict by a Russian court on separatist charges that have been widely condemned as politically motivated by the United States, the OSCE, media watchdogs, and international rights groups, including PEN America.

Ukrainian writers, journalists, cinematographers and artists, especially those in the occupied Crimea, consider it very correct and timely that the 83rd PEN International Congress is taking place in Ukraine. The main topic of the Congress, “Reclaiming Truth in Times of Propaganda”, is now urgent here in Ukraine as never before. Today, due to Russian aggression, the two Ukrainian people, Ukrainians and Crimean Tatars – as well as the entire Ukrainian political nation – have been victimized by violent Russian propaganda, which seeks to cover the real purposes of aggression, transition of the nuclear state to the policy of force and territorial seizures, seeks to justify the violation of international law, to damp the international response to large-scale killings and terrorizing the civilian population.

Crimea is the territory of ethnogeny of Crimean Tatars, their motherland and the place of their national self-determination. Now this territory is annexed by Russia. In the two regions of Donbas the legal Ukrainian administration is destroyed; there is an ongoing terrorist war against the local civilians. In Crimea and those regions of Donbas national education is destroyed; there is a fierce russification, extended militarization, military training of youth in schools and universities. False propaganda distorts history, glorifies only one nation, attacks the basics of democracy, stirs up the feelings of international and interreligious enmity. Independent media are destroyed, freedom of speech and meetings is canceled, all kinds of peaceful protests are treated as terrorism and extremism, civil activists are thoroughly repressed.

In Crimea, where I worked as journalist for more than 30 years, there are forged criminal accusations and court sentences against the authors of truthful articles and reports. Russian unlawful investigative bodies and cours disregard our appeals to freedom of speech, freedom of discussions and the right to personal opinion and outlook. The population of Crimea is, in fact, barred from truth, including blockage of various informational web resources and jamming of Ukrainian radio and TV stations. Oleg Sentsov, well-known film director, had been sentenced to 20 years of prison for resisting the occupation of his native Crimea. Ukrainian journalist Roman Suschenko is falsely accused of espionage in Moscow. In Crimea even social network users are persecuted for expressing their opinions, or even for sharing the texts of other authors. Dozens of Crimean journalists and civil activists have been already arrested and imprisoned. In fact, there is now a local relapse to Stalin’s repressions of 1930s. I am deeply grateful to the members of Ukrainian and other PEN centers who supported me during the investigation and court trial against myself for my participation in the discussion of the status of Crimea at Radio Liberty subsidiary website. I considered and will consider my duty to observe the standards of journalism, to write nothing but truth and defend everybody’s right to the freedom of speech. We all in Crimea highly appreciate your support and your demands to stop the repressions.

The aggressive dictators, unfortunately, count not only on their military force, but also on weakness and slowness of the European and world democracy. That is why world democratic movements have to understand that Russian dictatorship is a threat not only for Ukraine, but for the entire Europe. In fact, it moves the entire world closer to the third world war. Ukraine today is the forefront of our struggle for democracy, and we cannot afford to lose it, because it may entail total disruption of international law and democratic movements, repetition of the tragedies people endured in the 20th century, numerous and unjustified sacrifices. The events in Crimea and Donbas show that the world is now on the verge of new chauvinistic, inhuman movements. We have to prevent the repetition of the mass tragedies of the last century, which harmed many global nations.

Thus, world democracy in the 21st century cannot be weak. World democratic movements, all progressive people should join their efforts in order to stop the aggressor, compel him to leave the unlawfully annexed territories, return Crimea to its native people, Crimean Tatars, for creation of their national and territorial autonomy. The aggressor should also stop militarization of politics, education and civil life, secure freedom of speech and other freedoms, stop unlawful repressions against journalists and civil activists, release political prisoners.

In addition to other measures, world democratic movement should create an international monitoring committee on Crimea, which would document the ongoing
violations of human rights and international law in Crimea, and bring this case into international court of law.

This should be done, because we at Crimea believe that democracy is actually stronger than any aggressor, any weapon, any dictatorial regime. At the same time,
you should know that up to now, for almost four years (and not many wars in the world history continued that long), are the victims of aggression, and we are very
sensitive to the factor of time, factor of wasted life, factor of ruined perspectives, factor of life and death, factor of crippled life of the entire generation of Crimean
people, who are now subjected to false and aggressive propaganda, compulsory military training, zombification by Russian propagandist media, persecutions and
repressions. We have no other hope but for your support, for the strength of world democracy, for your effective steps in order to stop the aggressor and bring us
freedom.