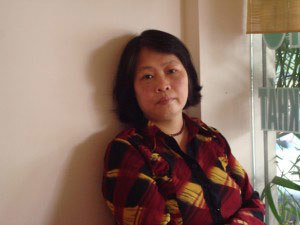 Last week, PEN centers around the world celebrated the news that Tran Khai Thanh Thuy, a Vietnamese writer and PEN American Center honorary member who was serving a three-year sentence on trumped up assault charges, had been released from a prison camp in Hanoi, thanks to immense international pressure—pressure that included the active engagement of members of Congress. The release, however, was not without restrictions: the same day, Thanh Thuy was put on a plane with her 13-year-old daughter and deported from Vietnam. She arrived in San Francisco on June 24.

As in several other countries, Cuba being the most notable case study as of late, the choice is simple: shut up, go to jail, or get kicked out of your own country. And the message to writers in these states where freedom of expression is looked upon as a menace rather than a universal right is clear: we don’t want your kind, your words, here.

Still, Thanh Thuy is lucky. Though her husband remains in Hanoi, and she said upon arrival in the U.S. that she would prefer to fight for her country from home, she is now free to write what she wants, and she has pledged to continue her work from here. And most importantly, at the most basic level, she is no longer behind bars, at risk of beatings by fellow inmates in horrendous conditions, like the more than 19 writers still in prisons across Vietnam.

Among those is Nguyen Xuan Nghia, another PEN American Center honorary member, a poet, journalist, essayist, and novelist serving a six-year prison sentence for “anti-government propaganda.” The indictment against Nguyen Xuan Nghia cited 57 pieces of writing, including poetry, short stories, and articles—a clear violation of his right to freedom of expression. Reports that we’ve received indicate that Nguyen Xuan Nghia’s health has deteriorated greatly in the B14 Labor Camp where he is being held, south of Hanoi.

We’ve seen this before and we’ve said this before: we can’t stop at just one. We can’t be complacent and wait and see if the Vietnamese authorities will release Nguyen Xuan Nghia.

So celebrate Tran Khai Thanh Thuy’s release by taking action again: send a letter to the Vietnamese authorities asking them to free Nguyen Xuan Nghia and all writers imprisoned for their work. After all, words are not a crime.