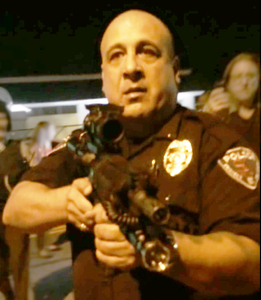 On November 14, the ACLU of Missouri filed a motion for a preliminary injunction to prevent police from interfering with journalists documenting the protests in Ferguson. The motion refers to PEN’s report as evidence that violations of press freedom by police were not isolated incidents. This motion takes on special significance as the city braces for a decision this week on the indictment Darren Wilson, the police officer accused of killing unarmed teen Michael Brown in August, which is likely to draw increased public demonstrations.

The ACLU of Missouri had secured a written agreement in August with several of the police departments involved in the response to the protests, which stated that the police “acknowledge and agree that the media and members of the public have the right to record public events without abridgement unless it obstructs the activities or threatens the safety of others, or physically interferes with the ability of law enforcement officers to perform their duties.”

However, numerous accounts from journalists—as well as PEN’s Press Freedom Under Fire report, documenting 52 alleged violations of press freedoms in Ferguson—made clear that police were not adhering to the August agreement, so the ACLU went back to court. Their motion also includes statements from a number of journalists who have been working to document the protests. Those statements include troubling assertions that further demonstrate the need for a full Justice Department investigation into the treatment of the media by St. Louis-area police:

Alexia Fernandez Campbell, reporter for the National Journal: “While I was in Ferguson, the interactions I had with law enforcement officials were threatening and intimidating. I had never previously witnessed police treat journalists in the above-described manner. I had worked as a crime reporter in South Florida for four years and my time in Ferguson was the first time I had ever felt afraid of a police officer. I felt far more afraid of the police officers in Ferguson than I did any of the protesters.” [Exhibit D in ACLU-MO motion]

Coulter Loeb, journalism student: “As I walked and took photographs…I was very careful not to interfere with what the police were doing and always stayed a few feet away from them as I took photographs. Although I was always walking and never interfered with the police as they moved the line forward, the officer closest to me shoved me with his baton and ordered me to ‘keep moving.’ At first, I did not react to this use of force and continued moving forward and taking photographs without interfering with the police, as I had been doing the entire time the line was moving in the direction of myself and the protesters. The same officer, however, shoved me at least two more times with his baton. I asked the officer not to assault me. The officer responded by asking me if I wanted to go to jail. I responded that I did not. I was then handcuffed and placed in the back of a police vehicle.” [Exhibit F in ACLU-MO motion]

Caleb-Michael Files, freelance journalist and social media producer: “While the protest and arrests were occurring on August 18, 2014, I was standing with some of my colleagues and other journalists in a public area that we understood to be a designated place for media to stand and document the protests. Despite standing on public streets and sidewalks, in an area that I understood to be specifically designated for media, we were pushed down by State Patrol Officers while we attempted to record the protests. After the officers knocked us on the ground, they stood over us with their guns drawn and ordered us to leave. We informed them that we could not leave because they had knocked us to the ground and were standing over us with guns drawn.” [Exhibit G in ACLU-MO motion]

As Ferguson awaits the announcement of the grand jury decision regarding whether to indict Darren Wilson for the killing of Michael Brown, police are preparing for the possibility of further public protests. Governor Jay Nixon has already decided to activate the Missouri National Guard “to support law enforcement during any period of unrest.” PEN urges all St. Louis-area authorities to emphasize respect for the constitutional and human rights to peaceful assembly and freedom of the press in the police response to demonstrations.

UPDATE: The ACLU of Missouri’s motion was successful! On November 21, U.S. District Judge John Ross granted three court orders against the City of Ferguson, St. Louis County, and the Missouri State Highway Patrol, ordering police to respect the rights of journalists and citizens to photograph and record in public places.