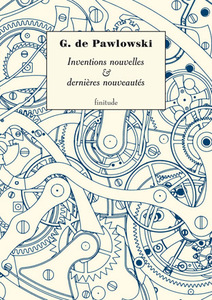 Amanda DeMarco is the recipient of a 2015 PEN/Heim Translation Fund Grant for her translation of New Inventions and the Latest Innovations by French science fiction writer and satirist Gaston de Pawlowski. Read an excerpt of the translation here.

Published in 1916, Gaston de Pawlowski’s New Inventions and the Latest Innovations is a catalog of absurd imaginary inventions. In it, Pawlowski presents an ingenious array of “improvements” affecting nearly every area of life, from anti-slip soap with spikes to a water filter inserted directly in the throat to two-sided German cannons (for defending the eastern and western fronts simultaneously).

In other words, it is a book of dumb jokes with a sharp underlying social critique—which sounded like a dream project to me when it was mentioned by a friend of a friend. And so I got my hands on a slim, recently reissued volume, a hundred or so pages long—a couple of months’ work at most, I thought, shouldn’t be too hard to find a publisher to pick it up.

Then I started to do my research. It turns out that all editions published in the past half-century have merely presented excerpts from what is actually a 350-page tome, in which Pawlowski reimagines more or less every object he has ever laid his eyes upon and many he has only heard of. It is stunning. If the book’s premise is absurdity, then its length is absurdity ad absurdum. Why would someone write 350 pages of jokes?

I think the answer lies in the fact that Pawlowski recognized a cultural shift so pervasive that it would come to affect nearly every facet of life in the industrialized world. Pawlowski witnessed the rise of consumer society and scientism, and the attitude that technology would remove discomfort from every part of life. It was a change so total that the only fitting satire of it was one that also satirized its totality.

And so Pawlowski set off to rewrite the world of things. In the face of a growing faith in science, his absurdities are an elegant, far-sighted critique of the church of innovation. Aping the endlessly optimistic language of the sales pitch, he explains how each product will solve the problems of the human condition.

Written in the depths of the First World War, the book also reflects the bitterness of an age in which technology unleashed previously unknown agonies on humankind. His “innovations” take on a more biting quality in the section “Armaments, Marine Defense, Wartime Stratagems”: a shell too large to be shot by a cannon that must be sent to its target by railway, for example, or “the cigar cutter aeroplane for pursuing zeppelins.”

A critique of technophilia is more relevant than ever in an age when drones rain down death remotely and start-ups receive funding for ideas so ridiculous, Pawlowski could have imagined them. As Leon Wieseltier put it in an article from The New York Times, “Aside from issues of life and death, there is no more urgent task for American intellectuals and writers than to think critically about the salience, even the tyranny, of technology in individual and collective life.” In our age, the humanities are constantly degraded as irrelevant and “soft”; Pawlowski’s book is a testament to the force with which a well-developed literary voice can address current issues.

Amanda DeMarco is the publisher of Readux Books and translation editor at The Offing. Her forthcoming translations include books by Franz Hessel and Francis Nenik. Her reviews have recently appeared in The Wall Street Journal, The Rumpus, and Los Angeles Review of Books.

Gaston de Pawlowski (1874–1933) was a French author best known for his early work of science fiction, the 1911 Voyage to the Land of the Fourth Dimension. He was also an important and prolific representative in the long tradition of French satire, and New Inventions and the Latest Innovations is his most significant contribution to the genre. Throughout his many publications, Pawlowski focused on science, the transformation of society, and skepticism of the “church of progress.” Born and raised in Paris, he was an early bicycle aficionado and a true visionary.

New Inventions and the Latest Innovations is forthcoming from Wakefield Press.

In the lead up to the Belarus elections, there has been a wave of politically charged arrests to silence opposition of the Lukashenko regime. PEN America & @pen_belarus are sharing the thoughts of Belarusian writers during this time. Learn more: https://bit.ly/2EwyzvJ

PEN America documents the influence Chinese gov't censorship has over US filmmaking. "The Chinese Communist Party, in fact, holds major sway over whether a Hollywood movie will be profitable or not." https://yhoo.it/2DHclqf