A “Campaign of Genocide” in Syria 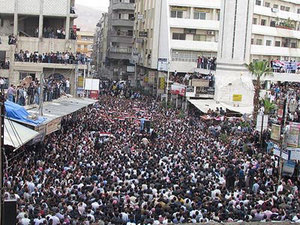 This morning, Christopher Merrill of the International Writing Program in Iowa sent PEN a translation of a letter by Syrian novelist Khaled Khalifa imploring the world to help end the “campaign of genocide” taking place in his country. Khalifa writes:

In all its modern history, the world has not known such courage as that manifested by the Syrian revolutionaries in our towns and villages. Neither has the world known such silence, now considered complicity in the extermination of my people.

My people are a people of peace, of coffee and music I hope you will one day savor, of roses whose perfume I hope will one day reach your nostrils, so that you will understand that it is this heart of the world that is today exposed to genocide, and the entire world is an accomplice to the spilling of our blood.

The full text of the letter is available at The Huffington Post.