56: Joe DiMaggio and the Last Magic Number in Sports 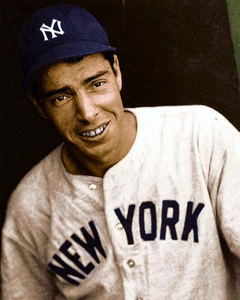 Had it ever been so hot in Griffith Stadium? DiMaggio reached up and wiped his brow. Ninety-five degrees and still nearly an hour before game time, the ballpark was a cauldron. Even in these conditions fans had mobbed their way to the stadium. They had come down from New York City, Baltimore and Philadelphia, up from the South and from who knows where else. When DiMaggio and Gomez had arrived at the park and stepped out of their cab, people had shouted and whooped and pushed nearer. There would be 31,000 fans packed in the stands, sweaty shirtsleeve to sweaty shirtsleeve, hundreds more than the 30,600 the ballpark officially held. The last time the two teams had played here, a midweek day game in May when DiMaggio’s hitting streak was an unnoticed 14, only 1,500 people had turned out.

“We couldn’t draw flies before this,” Senators manager Bucky Harris told reporters, peering up into a sea of hats. “The capacity crowd we have here is due to Joe and to nobody and nothing else.”

As DiMaggio made his way to home plate for batting practice, boys and young men spilled from the aisles, pushed past the ushers onto the field and went right up to him, tugging on his uniform, pulling on his arm, begging for his autograph. Over here, Joe! A kid held a baseball and a pen. Joe, over here! Another had a program in his hands. DiMaggio did not quite know what to do. He smiled and quickly signed his name on a couple of things as he walked past, and then he took his batting-practice swings. Soon afterward he moved back to the dugout and up into the shaded tunnel for a few moments’ respite. A last half cup of coffee. A Camel. Christ, it was hot. He just wanted the game to begin.

Sisler had played here as a Senator in 1928, acquired from the St. Louis Browns for a forgettable six-week stint near the end of his career. But it was not those days the old-timers remembered when they thought about Gentleman George. With the Browns he had been the best first baseman in baseball for years, the predecessor to Lou Gehrig. Sisler batted .407 in ’20 and .371 a year later, and then came ’22. It was said that no other ballplayer—not Ty Cobb, not the Babe—ever had a better all-around season than Sisler had that year. He led the American League with 246 hits, 51 stolen bases and 18 triples. He batted .420 and hit in a league-record 41 consecutive games. He dominated on defense, too, fielding his position with a range and agility unlike that of any other first baseman, before or since. In 1939 Sisler had been elected to the Hall of Fame.

The attention on DiMaggio at this doubleheader was not limited to the sweltering mass at Griffith Stadium—nor to the room in St. Louis where Sisler, now a sporting-goods salesman, tuned in. In New York City radios played on stoops in Jackson Heights and on fire escapes in East Harlem, where Italian was still the language of the street. In New Hampshire guests at a lakeside resort asked to receive updates on DiMaggio throughout the afternoon. The streak was being followed in Kansas City by Rugger Ardizoia and Bud Metheny and the rest of the would-be Yankees playing for the minor league Blues. Radios were on in Newark, of course—big Sunday crowd at the Vittorio Castle restaurant—and in small Connecticut towns. The play-by-play by the Senators’ Arch McDonald would be broadcast on the powerful airwaves of WMAL through D.C. and east to the coasts of Maryland, Delaware and Virginia—the seaside hamlets that lay an entire country’s width from Joe DiMaggio’s Grotto on Fisherman’s Wharf in San Francisco.

Business was thriving at the Grotto, and the explanation was clear. Joe’s older brother Tom, who managed the restaurant, estimated that since the streak had caught fire, the Grotto’s daily take had doubled. Tourists wanted to see the newspaper clippings of Joe on the wall and his trophies in the back, to chat a bit with Tom or his brother Mike and to imagine Joe returning to this place when his season was done. “Any wonder that I’m trying to keep this streak going?” a grinning Joe had told reporters after getting Tom’s report on the Grotto. “It’s cash in the register, boy.”

All week long Joe’s father, Giuseppe, had paced the front rooms of the family house on Beach Street, waiting for news of the streak. Tom couldn’t remember ever having seen their father so preoccupied, so concerned with the accomplishments of any of his three baseball-playing sons—Vince, Joe and Dom. The radio that Joe had bought his parents played throughout the afternoons and evenings (you never knew when you would hear some talk of the streak), and sometimes Giuseppe would ask his granddaughter Betty to call the newspapers to see if anything new had come in. Such fussing, though, was not the way of Joe’s mother, Rosalie. Each night she quietly lit a candle for Joe and changed the flowers in the Catholic icon, hoping to bring good fortune to her son.

Now at the bustling Grotto, Tom hustled about stroking his mustache and tidying things and making sure the customers were comfortable. Soon Mike came in from his fishing boat. Wine was being poured in the middle of the day. People ordered cioppino—It’s authentic at DiMag’s place, they reasoned. The restaurant’s radio had been turned on and set atop the bar, in case there was a bulletin. Several times Tom had to scold the waiters and busboys to keep their minds on their work.

People were also listening over in the Mission District, at the Double Play lounge and in the smoke shop outside Seals Stadium. And they were listening, as ever, in North Beach, on the church square and at the taverns and in the kitchens of their homes. All afternoon teenagers such as Alessandro Baccari Jr., who knew the DiMaggios, wore out the line phoning the Call-Bulletin and the Chronicle, hoping that the ticker tape had just delivered some news and they would have it a moment or two before others in the city. Getting the news first mattered to them. The boys from the playgrounds of North Beach clung to their roots, Joe’s roots, and to their memories of him as a young man. They would remind anyone in San Francisco then, just as they would remind people all over for many, many years, that Joe was their Joe first.