“The PEN America Literary Awards create for writers and activists a kind of magical Oscar-esque recognition and public acclaim for what is often lonely, quiet work.”

This year, PEN America will confer nearly $330,000 to writers and translators. The 2020 Ceremony will be the largest in PEN America’s history, taking place at the landmark venue The Town Hall, an integral part of New York City’s cultural fabric for nearly a century.

The night features a moving tribute to Mike Nichols by Cynthia Nixon and Christine Baranski, and Kenneth Lonnergan presents the PEN/Mike Nichols Writing for Performance Award to Tom Stoppard.

You can learn more about the 2020 Finalists here.

We are pleased to invite all members of the literary community and general public to join us for an evening of writers celebrating writers, in what has become one of the joyous literary events of the year.

Over the past few years, the PEN America Literary Awards Ceremony has grown. With the increased scale and profile of this event, we’ve introduced ticketing both to guarantee seats for those who want to join, and to underwrite this extraordinary evening of celebration. All proceeds from ticket sales will support our Literary Awards, Grants, and Fellowships Programs, which provide vital recognition and transformative support to writers at all stages of their careers.

Please note: The PEN/Hemingway Award for Debut Novel will be celebrated on April 5, 2020, at the John F. Kennedy Presidential Library and Museum in Boston. Stay tuned for more details. 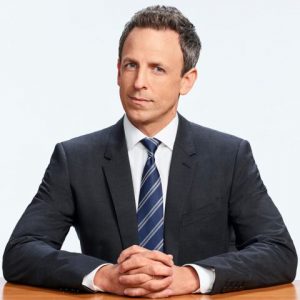 Seth Meyers is an Emmy Award-winning writer and host of “Late Night with Seth Meyers.”

Meyers hosted the 66th Primetime Emmy Awards in 2014 and was Emmy nominated in 2017, 2018, and 2019 for Outstanding Writing for a Variety Series. In 2018, he hosted the 75th Golden Globe Awards, which was Emmy nominated for Outstanding Variety Special. In 2020, he won the Critics’ Choice Award for Best Talk Show. In addition, Meyers was named one of the 2014 TIME 100, Time magazine’s 100 most influential people.

Meyers began his TV career with “Saturday Night Live” in 2001, where he was a cast member for 13 seasons. Meyers served as head writer for nine seasons and “Weekend Update” anchor for eight. In 2011, Meyers won the Emmy for Outstanding Original Music and Lyrics for host Justin Timberlake’s musical monologue. In all, Meyers has garnered 24 Emmy nominations for his work in television.

Meyers hosted the 2010 and 2011 ESPY Awards on ESPN and headlined the 2011 White House Correspondents’ Association Dinner to rave reviews.

PEN America is grateful for our supporting partners, The Town Hall and Hudson Booksellers.