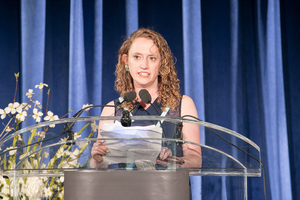 In a week of whirling debate, it sometimes helps to go back to first principles. When she was just 17, in 1942, Ginetta Sagan joined the Italian resistance. Less than five-feet tall, she had a nickname, Topolino, Little Mouse. Three years later she was jailed by the fascists. Interrogated. Beaten, sexually assaulted, and tortured by electric shocks. Ginetta was sentenced to execution. Left alone in a dark cell waiting to die. She was 19 years old. One day, a guard tossed Ginetta a hunk of bread through the bars.

Buried deep inside the loaf was a matchbox and a tiny slip of paper. Ginetta struck a match. On the note was written just one word, coraggio (courage). At that moment, Ginetta Sagan knew she was not alone. Her execution date was set. The very day she was to die, the resistance smuggled her out from prison. She went on to devote her life to showing other prisoners they too are not alone. In the 1970s she connected with PEN American Center, an organization dedicated to bringing courage to dark places.

This week, thinking of Ginetta in that cell, music notes start to play in my head. Ben E. King died just days ago. His was an anthem for us all, but could have been written for PEN.

While this year’s special courage award got some extra attention, its not the only courage award at PEN. There’s one we give every year: the PEN/Barbara Goldsmith Freedom to Write Award. It always goes to a writer in jail. Over the years, 35 out of 39 jailed recipients have been freed. Let’s give a round of applause to Barbara Goldsmith and to that extraordinary record.

Awards like this matter. I know two brothers who were captive in Iran’s Evin prison. Held in a bare room with 10 other men. Because they were punished for their research and writing, theirs became an international cause. They were eventually freed. I asked what became of their cellmates. The brothers said that they were all executed because no one knew about them. No one knew about them.

PEN stands by Azerbaijani journalist Khadija Ismayilova. Hers is a hard case. A jailed journalist in Azerbaijan goes with the territory. It isn’t news, until we make it news. Azerbaijan will soon host the first-ever European Games, an Olympic trial run. PEN Member Kostya Kennedy mobilized an extraordinary list of sports journalists: Frank Deford, Ken Burns, Bob Costas, and many more. They wrote to the International Olympic Committee. A group that cares deeply about the media and its brand. Who better than sports journalists to say those are in jeopardy as long as Khadija is in jail? In a minute you’ll get to know Khadija’s indelible words and irrepressible personality. And we’ll get all of you involved right here tonight at the PEN Gala. You’re all going to be part of this. We’re all here for a reason.

I won’t cry, I won’t cry
No I won’t shed a tear
Just as long as you stand by me

This has been a big week at PEN. Conflict is uneasy because our raison d’être is to stand united in the face of tyranny. Interrogators in Italy, executioners in Iran, fanatics in France, or autocrats in Azerbaijan. Last week’s attention has already led more writers from more parts of the world to turn to PEN. Some are reaching out because they want to help, and some because they need help. We’re getting more calls. More emails. More Khadijas. We need to step up and stand with them.

We cannot thank you enough for standing by PEN, as we stand by persecuted writers, journalists, and cartoonists all over the world. Thank you.