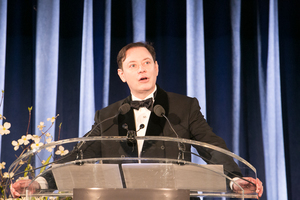 “I am Andrew Solomon, President of PEN American Center.

When PEN’s executive director and previous president were trying to persuade me to take this job, I mentioned that I had young children and was working on my own next books, and they assured me that being PEN president would entail only running a few board meetings and making occasional proclamations about worthy journalists imprisoned in remote countries.

One can be castigated for failing to mention the elephant in the room—or in this case, perhaps, the whale in the room. So let me say a few words about the Charlie Hebdo controversy. The defense of people murdered for their exercise of free speech is at the heart of what PEN stands for. So is the unfettered articulation of opposing viewpoints, as we have seen over the last ten days.

Charlie Hebdo’s mission of satirizing sacred targets endured despite the firebombing of its office in 2011 and the slaughter of much of its staff in January. Few people are willing to put themselves in peril to ensure that we are all free to say what we believe. Charlie Hebdo’s current staff have persisted, and tonight’s award reflects their refusal to accept the curtailment of lawful speech through violence.

“Words are not deeds,” says Shakespeare’s Henry VIII, but I would disagree. Hate speech is dangerous—Nazi rallies or the Ku Klux Klan, for example, sow great darkness, and my time in Rwanda brought home to me how easily propaganda can drive ordinary people to appalling acts. Most of the writers in this room wouldn’t write if we didn’t believe in the power of words for good, and if one accepts that capacity, one must also recognize their potential to inflict damage.

At PEN, we defend free speech above its contents. The suppression of controversial ideas does not result in social justice, nor is it a constituent of freedom. I came of age in the time of “Silence = Death,” the rallying cry of 1980s AIDS activists, and I have come to believe that muteness is more toxic than speech. Silence = Death. There is a radical brilliance in saying what you have been told not to say in order to make it sayable.

Most of us gathered here tonight can say what we want. Many have ready means to disseminate what we say. Our privilege comes with an obligation to those whose speech is disallowed. But we fight for global free expression out of more than noblesse oblige. “Until we are all free,” Emma Lazarus wrote, “we are none of us free.” The wide embrace of human diversity implied in Lazarus’s words is our purpose here. Enforced silence denies the contiguity between our inner and outer selves.

We bewail Ilham Toti and Liu Xiaobo because they remain imprisoned in China; we are offended on behalf of Saudi blogger Raif Badawi, sentenced to ten years in prison and a thousand lashes for “insulting Islam”; we are horrified by the hacking to death of American citizen Avijit Roy, killed in Bangladesh because of his qualms about what he called “the virus of faith.” Some will find lines by these writers with which they strongly disagree, as some disagree with Hebdo, but nothing these men and women have written can justify the silencing of their voices, nor compromise our respect for their glittering audacity.

Our concern, however, is not only for those who cannot speak, but also for those who cannot hear. That number includes ourselves; for all our vaunted American freedoms, we are impoverished by these constrictions. We have seen the National Security Administration engaged in massive interception of our email, which compromises writers’ sense of freedom, as evidenced by a recent PEN survey. We have seen the curtailment of press freedoms in Ferguson, as recorded in another PEN report. In Guantánomo Diary, former PEN staffer Larry Siems has edited the writings of Mohamedou Ould Slahi about his incarceration at GITMO despite clear evidence that he has committed no crime.

The notion that self-expression is liberating has been given new scope as more and more people have turned to language as a remedy. We see this principle at work in the offices of modern psychotherapists and grief counselors; in the increasing popularity of restorative justice; in the Truth and Reconciliation Process in South Africa; in the U.N. charter; and in the Internet-enabled explosion of communication and literature. We express ourselves to cure the world.

In 1997, Daw Aung San Suu Kyi asked the American people, “Please use your liberty to promote ours.” In fact, our liberty is contingent on everyone else’s. PEN esteems not only exquisite literature, but also the right of all people to express themselves. In fighting to sustain the freest possible expression here and abroad, we are engaged not in two separate projects, but in a single battle for the open exchange of ideas, because without the deepest choice of words among the widest population, we cannot be our authentic selves. PEN stands proudly at the intersection of language and justice—we will be the literary voice in the movement for human rights, and the human rights voice in the domain of literature.

I am honored to succeed Peter Godwin as the president of PEN American Center. I admire his steadfast commitment to human rights at home and abroad; his inspired eloquence on the bewildering ways of the human heart; his tremendous executive skill; and his underlying kindness. Peter, will you please stand? Among Peter’s best moves was hiring Suzanne Nossel as executive director. I thank PEN’s staff: we could not have a team more unstintingly devoted to ideals and more adept at negotiating the concrete world to which they must be applied.

Tom Stoppard has inspired me since I first saw Night and Day in London when I was fourteen; my college acting debut was in Dogg’s Hamlet, Cahoot’s Macbeth, and I’d never have believed then that I’d one day share a stage with you.

The 2015 PEN/Jeri Laber Freedom to Publish Award goes to Irina Balakhonova, founder of the Russian publishing house Samokat, who defiantly publishes work featuring gay characters despite the law criminalizing the “promotion of homosexuality.”

I thank the members of the Gala Committee and the Literary Table Hosts for their dedicated commitment and personal generosity, and ask them to stand. You have done the best and noblest work of any committee in PEN’s history. Annette Tapert has chaired this gala for 16 years with unfailing grace and a singular ability to marry glamour and substance, also sponsoring the PEN/Allen Foundation Literary Service Award; she has built this occasion into the triumph that it is.

At tonight’s gala, we have raised over 1.4 million dollars, 15 percent more than ever before. We have done so in part because of the generosity of Penguin Random House.

And so it is with particular gratitude that I now confer on Markus Dohle, CEO of Penguin Random House, the status of Publisher Honoree. When I thanked Markus for his generous support through a tumultuous time, I remarked that corporate honorees often flee from controversy. He said, “Don’t think of us as a corporation. Think of us as a cultural institution. Our work is about content, about helping writers say what they have to say as freely as possible.” We are here to honor Markus, but Markus honors us with that point of view. He is a brilliant executive, but he is not afraid of idealism. He has a personal commitment to helping writers write and helping readers read and to being the bridge between those interests. He is generous in his person and in his spirit; he’s a good storyteller in his own right; and he has an exuberant sense of humor about himself.

The merger of Penguin and Random House in 2013 was met with trepidation, but Markus has continued both houses’ long tradition of publishing controversial books and giving high art its pedestal. The details of that radicalism are enumerated in the program books for this event; to me it falls now to salute Markus and Penguin Random House for connecting a diversity of writers with readers around the globe. Markus, you yourself are a cultural institution—one of our finest.