2014 PEN Poetry in Translation Award: Four Questions for the Winners 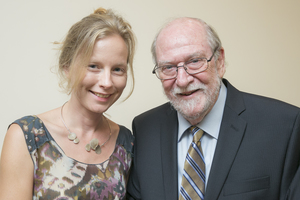 Karen Emmerich and Edmund Keeley are the 2014 recipients of the PEN Poetry in Translation Award for a book-length translation of poetry into English published in 2013. Diaries of Exile by Yannis Ritsos, is translated from the Greek and published by Archipelago Books.

Karen Emmerich: Archipelago Books had published my translations of the poet Miltos Sachtouris several years earlier, and Jill Schoolman, the editor of Archipelago, was interested in doing another book from Greek; she was particularly interested in publishing a volume of Ritsos’s work. At the time, I was a postdoc at Princeton, where Professor Keeley is an emeritus faculty member. Over dinner one night, I asked if he might want to collaborate with me, since he had translated several volumes of Ritsos’s poetry in the past, and had also known Ritsos personally. He very kindly assented, and we discussed a number of different projects, including a volume of selected poems. In the end we preferred to work on something that we could present in its entirety. Ritsos was so prolific, and his work varies so much in style and form, and even genre, that it was actually quite difficult to settle on what we would do. But we kept on coming back to these three diaries in poetry, written while Ritsos was a political prisoner on a series of desert islands in Greece. For me, there’s something about that in-between genre—part diary, part poem, part letter to the world—that felt both fascinating and important. The poems aren’t always polished, but taken as a whole, they’re witnesses to a certain time and place and experience.

Edmund Keeley: It is exactly Ritsos’s role as witness that most attracted me to his Diaries of Exile, especially since I was in Greece for part of the time that he was living in exile, not entirely aware of what the Greek government was then doing to torment the country’s communist citizens but conscious, as the son of an American Foreign Service officer serving in Athens, that the politics of that era in Greece was part of a dubious history involving my home country. It wasn’t until some time later, as a student and teacher of that history, that I sought out Ritsos’s work as a vital aspect of the literary rendering of those years, my conscience suffering because of the ignorance that had delayed knowledge of Ritsos’s contribution, and my collaboration with Karen Emmerich on these particular volumes is an effort to give the master more of what I felt was his due from two American translators.

Emmerich: We worked on the translation for several months in Princeton, and then continued to work on it once I had moved away, meeting several times to read through and discuss the translations on my trips back to the area. I don’t know that I can point to a “most challenging” aspect of the project, but it was certainly difficult to try and remain accountable to these poems’ status also as historical documents. There were just so many things about life in the camps that we had to research—if there was electricity, for instance, which made a difference to the translation, since the same word could have meant “oil lamps” or “light bulbs.”

Keeley: What I found to be most challenging about this particular series of poems was establishing what W. H. Auden spoke of as a “unique tone of voice” in defining Cavafy’s poetry, the kind of voice that most poets of the first order succeed in creating for themselves and their readers during a lifetime. I believe that underlying Ritsos’s somewhat shifting narrative voice in these poems lies a sensibility, a unique tone, if you will, that expresses his understanding of and feeling for the particular time and place that these poems inhabit. Attempting to capture the equivalent of that tone in English was a demanding enterprise.

Keeley: I have often collaborated with other translators in the past—Philip Sherrard and George Savidis in particular—but never with the pleasure and ease and inspiration that working with Karen Emmerich provided.

Emmerich: Well, I’ve never collaborated on a translation before, so that was a new experience for me. It was wonderful, actually. If one thing translation can allow you to do is to share work you care deeply about with others, collaboration lets you do that from the very first moment. It also means that those difficult decisions that can be fraught with feelings of responsibility and uncertainty are at least shared decisions. I was incredibly grateful to have the opportunity to work with Professor Keeley, first of all because of his vast knowledge of Greek literature, but also because it allowed us to develop a relationship, both professional and personal, that I now hold very dear.

PEN: Yours was a collaborative translation. Can you explain what form your collaboration took?

Emmerich: We divided up the poems, and each completed first drafts for half of the material. Then we switched, read over one another’s work, made revisions, noted questions, and came together to discuss the translations, always with the Greek at our side. Then we went through several more sets of revisions, combining work on our own with meetings where we discussed the poems together. During our last few sets of meetings, we just read the translations out loud, from start to finish, pausing where anything struck our ear as needing attention. And of course they all went to Jill, who has a wonderful ear, so there were her revisions to discuss as well.

Keeley: Karen’s account of the process of our collaboration is thorough and accurate, so there really isn’t anything for me to add, except to say that I was grateful, as in my earlier collaborations, to have an especially sensitive reader of Greek poetry and a creative translator working with me, sometimes by way of the internet and sometimes by my side, and I was also fortunate to have a publisher so thoroughly devoted to literary translation.